RCare is not only proud to be the maker of the most advanced wireless nurse call and advanced monitoring systems in the world, but we’re also honored to be a member and advocate of the Eden Alternative initiative.

What is The Eden Alternative? It’s a non-profit dedicated to improving the quality of life for elders and their care partners. “In a culture that typically views aging as a period of decline, the Eden Alternative philosophy asserts that no matter how old we are or what challenges we live with, life is about continuing to grow. Building on this new paradigm, it affirms that care is not a one-way street, but rather a collaborative partnership.” 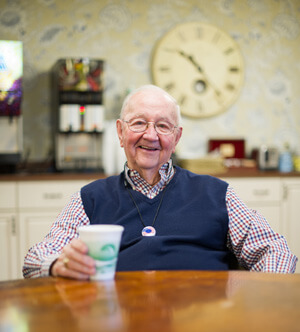 That’s one of the many reasons that RCare supports The Eden Alternative. RCare’s mission is to improve the lives of elders and those who care for them. We’ve been diligently working at this mission since our founding in 2006, and our innovations in user-friendly, easy-to-learn technology have allowed us to help more and more elders and caregivers every year. We take the time to understand caregiving and the unique issues facing each community to build customized solutions that last.

One of our latest innovations, the GeoPendant, is an example of our commitment to the quality of life of elders and carers. An attractive pendant that can be worn on a neck loop or on the wrist, the GeoPendant’s first function is that of a PERS pendant. But the GeoPendant does a lot more. It lets caregivers define geographical safe zones for elders who need them. Should the elder leave that safe zone, the care staff receive an alert so that they can discreetly intervene.

Like everyone else, elders value their independence and dignity. Moving to a locked ward is a big step that should only be taken when there is no other option. For many, the GeoPendant can now be that other option. Elders wearing the GeoPendant are free to go about their day, within an area defined as safe for them. The only time their movements are brought to anyone’s attention is if they move outside their personalized safe zone.

This is especially useful with so called “mixed populations.” One does not develop a need for a locked memory care unit overnight. These needs arise slowly over time. This means that there are people who may need moderate wander management who live in completely open communities alongside many who do not need such assistance. With the GeoPendant, only those elders who need this type of care receive it, and they do so discreetly, without embarrassing sirens or alarms ringing through the hallways.

One of the truly innovative features of the GeoPendant is that it doesn’t use GPS. Instead, it uses the existing RCare equipment placed throughout the community to determine if you are, or are not, where it’s safe for you to be. Also, safe zones are not just defined in terms of horizontal area, but also vertically, for example by floor. This is because the device utilizes artificial intelligence. During setup it is taught where the safe zone is for a particular resident. The elder’s zone can be highly specific, even singling out precise rooms and corridors for in/exclusion.

GeoPendants are integrated into the wider RCare nurse call system, meaning staff won’t have multiple systems to monitor. If an elder moves out of a safe zone, the alert is sent to the high-powered nurse call system. Care staff receive the alerts on their HIPAA-compliant RPhone mobile handsets, just like any other nurse call. 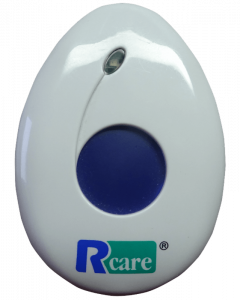 Communities and senior advocates are increasingly drawing attention to the indignity of noisy alarms. They disrupt sleep. They disrupt daily life. They embarrass elders unlucky enough to trigger them. Worse, they may immobilize them, if the elders avoid activities that risk triggering an alarm. And, like the boy who cried wolf, frequent alarms tend to get tuned out, which could put elders at risk. RCare’s alerts are all quiet. Whether an elder pulls a cord, pushes a button, or leaves a safe zone, the alerts are sent silently to the care staff. Calls are “claimed” by a caregiver using the “I got it” button on the RPhone, ensuring that everyone’s call is answered, without carers duplicating their efforts.

Because the GeoPendant is a personal emergency response system as well as a location minder, elders who need both don’t need to carry two devices. In addition to discreetly safeguarding their whereabouts, the push button can be used to summon help at any time.

According to the Alzheimer’s Association, there are currently 5 million Americans living with Alzheimer’s, and by 2050, that number could be as high as 16 million. By mid-century, someone in the United States will develop the disease every 33 seconds.”

Dr. G. Allen Power is a physician and a senior advocate. In his book, Dementia Beyond Drugs:
Changing the Culture of Care, he argues that “care environments are often designed around the needs of the carers, rather than those with dementia.” This is an issue that The Eden Alternative is addressing. It’s important that both parties in the care partnership are respected and honored.

A diagnosis of Alzheimer’s or dementia doesn’t need to trigger an immediate loss of independence, even when it’s an effort to keep elders safe. The Eden Alternative challenges us to strive to enhance the well-being of elders by eliminating the three plagues of loneliness, helplessness, and boredom. RCare has accepted that challenge, and one outcome is the GeoPendant, designed to help elders live happier, more independent, more dignified lives. And at the same time, RCare is helping caregivers offer the best, most advanced care. For a small device, the GeoPendant is having a very big impact on the lives of elders and their care partners.

With each passing year, technology is playing a more significant role in improving and enhancing the lives of our aging population. Not only do these devices combat isolation and depression by increasing communication, they also enable loved ones to regain their independence. At RCare, we believe in holistic senior empowerment, and we feel technology plays a critical role. We have come up with four vital segments of technology to provide seniors with the most bang for their buck.

Wireless Internet (or WiFi) has arguably become as essential to any  american household as running water or electricity. Everything can be accessed online or through a smartphone “app”, eliminating the need for a stationary personal computer at all.  Many family and friend communications, photo sharing and information exchanges happen on websites and social media networks.   Not to mention, many remote monitoring and alert services (think alarm, security and pendants) rely on WiFi connectivity. Without wireless Internet access, our senior population may feel disconnected and disengaged with the world around them.

Now that we’ve done away with the traditional stationary computer, adding a tablet, simplified communication device or smartphone into the residence of a senior is a great way to reconnect. Seniors can listen to music, read books, play cards, view photos, track their health, and even play games to promote brain health.  Choices range from your typical iPad/Samsung tablet manufacturers to devices specifically targeted to connect and engage seniors with their family and caregivers (e.g. www.grandcare.com)  Wow!

For seniors wishing to secure more independence, wireless remote monitoring and crisis management systems like RCare can really save lives. Technologies ranging from motion detectors to door sensors to push pendants can monitor the activity patterns for signs of an emergency, without violating privacy.

For a patient who may have wandering tendencies or memory loss, wearing a advanced location pendant and push button can be essential. While other systems may only give caregivers a general idea of a pushed pendant location, RCare allows care facilities to pinpoint nearly the exact location, and in a fraction of the time.