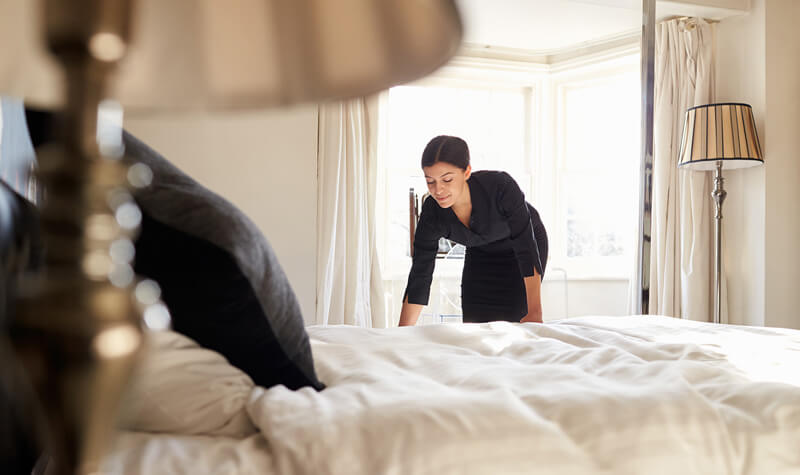 One year ago, the American Hotel & Lodging Association (AHLA) made a groundbreaking pledge to improve the safety and security of hotel workers in the United States. Member hotels were invited to commit to the 5-Star Promise, a voluntary pledge to improve the safety of their workers by improving their sexual harassment policies, training and resources. The most significant point of the 5-Star Promise was the promise to provide electronic safety devices (ESDs) to their staff, to keep them safe on the job.

When the 5-Star Promise began, there were 17 participating hotels and hotel chains nationwide. Now, just one year later, participation has grown to 56, a dramatic 230% increase. This represents an estimated 20,000 hotel properties, with an estimated 1.2 million employees who will be safer on the job.

“As an industry of people taking care of people, we have always been deeply committed to safety and security for our employees and guests. We have a responsibility to ensure they feel safe and secure,” said Chip Rogers, president and CEO of AHLA. “I’m proud of the progress we have made as an industry over the past year, and we will continue our efforts to ensure America’s hotels are safe places for all those who work in and visit them.”

“Just the possibility of danger has been enough of a morale depletant over the decades to give certain organizational roles a toxic aura.” – Larry Mogelonsky, Hotel Security Consultant

Housekeepers typically work alone. When confronted with risky situations, they have little protection. Stories abound of guests exposing themselves to workers, or worse. With an electronic safety device, the endangered worker presses a button to summon assistance from hotel security. The alert is sent automatically, and includes the location of the employee, so security can respond immediately to where help is needed.

The impact of the 5-Star Promise is even greater than just the safety and security of current employees. It also changes the perception of the job and its risks, which is critical to staffing, an important challenge for the industry.

“Just the possibility of danger has been enough of a morale depletant over the decades to give certain organizational roles a toxic aura. For instance, I don’t doubt for a second that the horror stories of housekeepers past have deterred many potential hires, thereby contributing to the current staffing problems we presently face,” according to hotel security consultant Larry Mogelonsky. “Given this likelihood for not only widely augmented safety but also improved morale and employee retention, I’m all over ESD adoption at any hotel worldwide.”

Choosing the right ESD system is important. In case of an emergency, you want to ensure that your system works as needed in your facility. RCare’s wireless ALP Hospitality Suite can help. RCare has been an innovator and leader in the crisis alert and nurse call industry for over a decade. RCare’s systems have a proven track record for reliability and accuracy, even in the toughest conditions. RCare’s hotel crisis system uses military-grade RF, a signal protocol proven to be far more reliable than WiFi or Bluetooth, to ensure every alert is received. It has a wide listening range, even in the oldest buildings with challenging infrastructure. It uses Advanced Locating Protocol (ALP) to send location information with every call, so valuable time isn’t wasted determining where help is needed. Regardless of your hotel’s size or budget, RCare can help.

Want to know more about hotel duress systems? Contact RCare to find out how they can enhance safety and security for your hospitality staff.