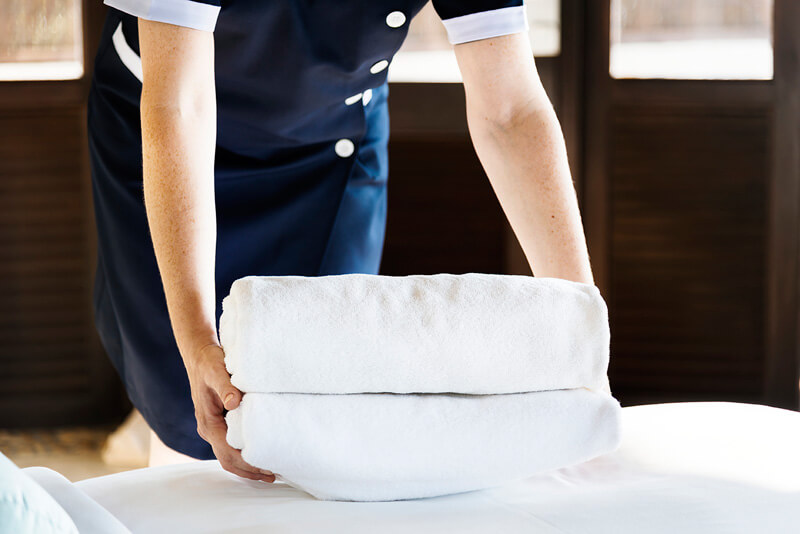 This summer, the city of Sacramento passed legislation requiring hotels to provide panic buttons to help keep hotel employees safe. The city follows on the heels of the surrounding county, which earlier passed such legislation for hotels in the unincorporated areas of the county.

Numerous housekeepers from Sacramento hotels appeared before the legislature to tell their stories. In one case, a man had started stalking a housekeeper as she cleaned. Each time she would leave a room, he was there, waiting for her. To escape him, she locked herself into a guest room and called security, before she could carry on working. In another story, a male guest requested that a housekeeper bring him a bottle of mouthwash. When she arrived at the room, he didn’t answer her knock, although she knocked three times, as required by hotel policy. When she entered the room, she found him waiting to expose himself to her. She dropped the bottle of mouthwash and fled, according to an account in The Sacramento Bee.

How common is the problem? A survey of nearly 500 women working at hotels and casinos in the Chicago area found that 58% of hotel workers had experienced some type of sexual harassment by guests, sometimes multiple times, according to a report in the Chicago Tribune.

Sacramento joins a growing list of cities, states, and unions that are requiring these safety devices for vulnerable hotel employees. And, California is currently considering legislation to expand protection to workers in hotels throughout the state.

“No one should ever be fearful doing their job, least of all associates on-property who are so vital to the success of our company and our industry,” said Arne Sorenson, CEO of Marriott International.

When confronted with a threatening situation, panic buttons allow the worker to simply press a button. The button sends an alert to on-site security, who can intervene.

In order for the panic buttons to be effective, they need to provide help quickly. The alerts need to be sent immediately, and the response to the alert must be quick. Knowing the location of the employee who made the call, so that assistance can be sent to the right place, is critical to rapid response, according to hotel security expert Einar Rosenberg. It is also a difficult feature to find in hotel duress systems.

One system that has locating capability, along with proven reliability, is the Hospitality Suite by RCare, Inc. In addition to its alerting features, the system also provides response time data, to help hotels monitor and improve response times to employee emergencies.

RCare ensures reliability for sent and received alerts with their military-grade RF, a signal protocol proven to be far more reliable than WiFi or Bluetooth. And it has a wide listening range, even in the oldest buildings with challenging infrastructure.

“This is about expressing how we at the local level value the protection of women in the workplace,” said Sacramento county supervisor Phil Serna

When it comes to keeping hotel employees safe in the workplace, you can count on RCare’s wireless ALP Hospitality Suite.

Contact RCare to find out how they can enhance the safety and security for your hospitality staff.